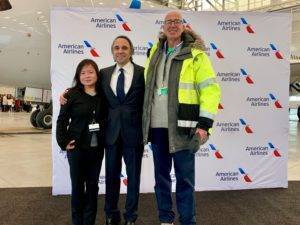 R.M. Chin’s Tom Coyne and Winnie Moy provided program/project management for the design and construction of the 191,000 SF facility – now the largest hangar at O’Hare. Hangar 2 can house two wide-body 777-300 aircraft simultaneously or as many as six narrow-body aircraft, ensuring the facility will meet American’s current and future fleet mix.

“It’s a privilege to be part of this historic project that brings state-of-the art equipment for American’s aircraft maintenance technicians,” said R.M. Chin President, Eileen Chin. “Thank you to American Airlines and all our consultant and contractor partners in delivering this project.” W.E. O’Neil served as the General Contractor.

The $200 million investment in the new hangar and ground service equipment (GSE) facility marks another milestone in a long list of American investment at O’Hare. The expanded space allows for more workload capacity and aircraft parking flexibility. The former Hangar 2 and GSE facility are being torn down as they were in the footprint of the new Runway 9C/27C, estimated for completion in 2020. The new runway is one of many capital improvements underway to complete the airfield modernization, which also sets stage for the upcoming $8.5 billion terminal expansion at O’Hare. 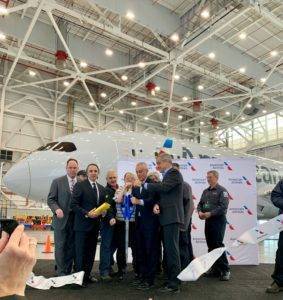