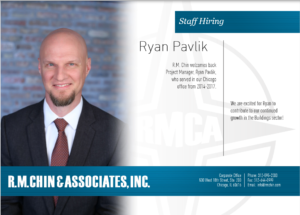 On October 1st, we welcomed Ryan Pavlik back to R.M. Chin! Ryan is a Project Manager and is responsible for overseeing various Construction Management duties for Illinois Tollway Facilities. This involves day-to-day facilitation and inspection of requested projects, including access coordination, submittals coordination, design compliance, and daily jobsite reporting. He will also be assisting in development of the Tollway Facilities Construction Management Contract with the rest of the R.M. Chin Team and will be reporting to Joe Donnell.

Ryan earned a bachelor and master’s degree in architecture and has several years of service as an architect. In his most recent work experience, he served as a PM for a general contractor in the commercial Chicago market and served as a PM/CM/OR for R.M. Chin from 2014-2017.

He is excited to be working with R.M. Chin and his previous team again and to have the opportunity to work on diverse projects types in different places and various building projects for the Illinois Tollway.

Outside of work, Ryan’s hobbies include hiking, camping, and riding his bicycle as often as he can. He enjoys bicycle mechanics and restoring or reconfiguring bikes. Last October, Ryan and his wife moved into their fixer-upper house in Berwyn, Illinois and are in the process of refinishing the upstairs bedrooms and moving on to other parts of the house. Not only are they celebrating one year of living in their house this month, but also their one-year old dog’s birthday! Ryan and his wife adopted a puppy in March of 2018 that was originally from New Delhi, India and love having her in their lives.